The LNVH board currently consists of six members: 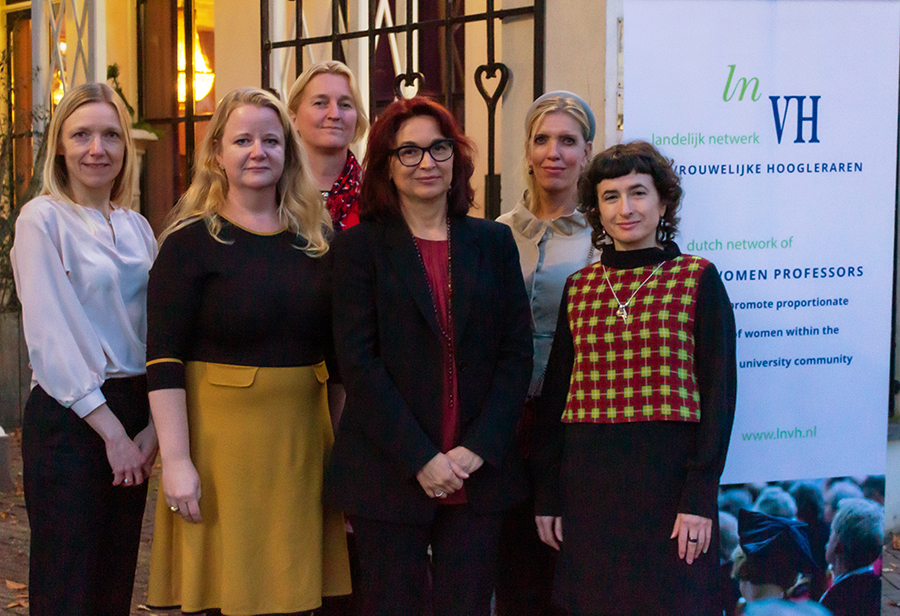 Hanneke Takkenberg is a clinical epidemiologist and professor of clinical decision making in cardiothoracic interventions at the department of Cardio-Thoracic Surgery in Erasmus University Medical Center in Rotterdam. She is married and has 4 daughters. After obtaining her MD at VU in 1994, she worked for 2 years in Los Angeles, and then returned to The Netherlands to pursue a scientific career in clinical cardiovascular practice. In 2002 she obtained her PhD in cardiovascular clinical epidemiology at Erasmus University Rotterdam and started her research group in Erasmus MC. In 2007 she co-founded with Jolien Roos-Hesselink VENA, the Erasmus MC Network of Academic Women. In 2012 she was appointed professor.

Hanneke is a scientific leader in the field of heart valve disease and currently president-elect of the Heart Valve Society (HVS). Her research focuses on clinical decision making and patient empowerment including translation of this knowledge to clinical practice through the development and implementation of patient information portals and decision aids for patients with heart disease. Gender diversity and diversity&inclusion as a tool to improve research and achieve an inclusive scientific community are cornerstones of her work as Chief Diversity Officer at Erasmus University (2015-present). Professor Takkenberg is chair of the Erasmus Female Professors Network board and advisory board member for Erasmus Center for Women and Organisations.

Hanneke Takkenberg is a LNVH board member since January 2018.

Tanya Bondarouk is Professor of HRM and Technology at the University of Twente (The Netherlands), where she is the head of the HRM research group. Authoring more than 100 international journals and book chapters publications, more than 10 scholarly books, and editing special issues in international refereed journals, T. Bondarouk has been conducting research into an integration of HRM and Technology, examining conditions for e-HRM implementations and benefits of digitalisation for the HRM function. In 2018 she got two awards, “The Best HRM Professor in the Netherlands”, and “The Inspiration Award of the University of Twente”. Since 2020, Tanya has been actively involved in the Recognition and Rewards Dutch program, where she advocates for diversity in career paths, diversity in recognition of individual and team effort in academia. With the origins in Saint-Petersburg (Russia), trained in chemistry and management, T. Bondarouk sees her next challenge as to inspire women professors, to engage in talent development in academia in The Netherlands and abroad.

Tanya Bondarouk is a LNVH board member since November 2021.

On joining the LNVH board she says: "I feel honoured to be presented as the newest board member of the Dutch Network of Women Professors (LNVH). Thank you LNVH for this important position. Please be assured of my enthousiasm for and commitment to further strengthening the position and professional fulfilment of women -of all backgrounds- in academia! Gender equality is not ‘just’ about equal representation of women in all positions, and in particular in positions of power. Ultimately it is about justice. Women are still experiencing a gender gap to the invisible but undoubtedly masculine norm in academia: in the way we treat female academics, organise our institutions and value our researchers. Let’s get to work!"

Kiki Lombarts is an LNVH board member since August 2022.

Sandra Groeneveld is a Professor in Public Management in the Institute of Public Administration of Leiden University. She teaches in the fields of organization theory and public management as well as on research methodology and quantitative research methods and techniques. Her research interests include the structure and management of public organizations, focusing particularly on questions of diversity management, leadership and organizational change.
Before joining Leiden University she was employed at the Department of Public Administration of Erasmus University Rotterdam as an assistant professor (2006-2011) and as an associate professor (2011-2014). From 2009 until 2013 she also served as the executive director of the Netherlands Institute of Government (NIG), the Dutch national graduate school for public administration and political science. In 2014 she was appointed full professor at Leiden University. She is currently involved in the establishment of the Leiden Leadership Centre, an expertise center on public leadership at Leiden University.

Sandra Groeneveld is a LNVH board member since September 2018.

Sera Markoff works at the interface of astrophysics and astroparticle physics with a focus on the most extreme objects in the Universe, black holes.

Originally from the USA, after a BSc in Physics at M.I.T. and a PhD in Theoretical Astrophysics at the University of Arizona in 2000, she moved to Germany as a Humboldt Research Fellow at the Max Planck Institute for Radio Astronomy.  After that she returned to M.I.T. as a (US) National Science Foundation Astronomy & Astrophysics Postdoctoral Fellow, and then started as faculty at UvA's Anton Pannekoek Institute for Astronomy in 2006, where since 2017 she is professor of Theoretical High-Energy Astrophysics. She has been awarded several prestigious personal research awards such as the NWO VIDI and VICI, and was co-PI of the seven-institute EU-FP7 Marie Curie Initial Training Network “Black Hole Universe” (2008-2012). In 2014, she was named a Fellow of the American Physical Society, and in 2015 she was the Tinsley Centennial Visiting Professor at University of Texas, Austin.

Sera finds community organisation, activism and outreach important. She helped set up the Gravitation and Astroparticle Physics Amsterdam (GRAPPA) Centre of Excellence at UvA. She helped found the Women in the Faculty of Science (WiF) network at UvA, along with Prof. Marian Joëls, in 2007, and helped initiate the successful MacGillavry Tenure-track Fellowship for women. She enjoys engaging the public, and beyond giving talks also carries out structural activities with elementary school children from diverse backgrounds. She was awarded the Willem de Graaff prize from the Royal Netherlands Astronomical Society in 2019 for her public outreach activities.

Sera Markoff is a LNVH board member since December 2019.

Moniek Tromp finished her MSc in Chemistry, with specialisations in spectroscopy and catalysis, at the University of Utrecht (Nld) in 2000. She then obtained a PhD from the same university, in the fields of homogeneous catalysis and time-resolved X-ray absorption spectroscopy with Profs. Koningsberger and van Koten.  After finishing with distinction (‘cum laude’, greatest honours possible) in 2004, she moved to the University of Southampton (UK) for a Post-Doctoral Research fellowship in the fields of heterogeneous catalysis and spectroscopy. In 2007, she was awarded an EPSRC Advanced Research Fellowship to start her own independent academic career (and became lecturer). She moved to Germany in 2010, where she took up a position as professor in Catalyst Characterisation at the Technical University Munich. In 2014, she decided to come back to the Netherlands, where she has been working at the University of Amsterdam. From July 2018 she has taken up the Chair of Materials Chemistry at the Zernike Institute, University of Groningen.

She has been awarded prestigious fellowships/awards like the EPSRC Advanced Research Fellowship, NWO VIDI and the NWO Athena prize. She is active in numerous science advisory and review panels of large research facilities and universities internationally, part of a European Science Strategy team for large research facilities in Europe, has published over 120 papers in high profile journals and given over 100 invited lectures worldwide. She is chair of the Dutch Catalysis Society (of the KNCV). She is co-chair of the organizing committee of the annual conference on Catalysis in The Netherlands. Gender and diversity are important for her and she has been active as Gender Equality Officer (D) and is now developing programs for primary school on science and engineering as well as gender bias issues. She is also chair of the Rosalind Franklin Fellowship program of the Faculty of Science and Engineering at the University of Groningen. Her research focusses on the development and application of operando spectroscopy techniques in catalysis and materials research (incl. fuel cells, batteries, photochemistry, as well as arts) with a focus on X-ray spectroscopy techniques.

Moniek Tromp is a LNVH board member since April 2019.

The bureau is the beating heart of the LNVH. Located in Utrecht, it houses a managing director, a programme officer and a secretary. They support, amongst many other things, the board in executing the long term policy. Please contact us directly or via our secretary for answers to your questions, policy advice, for/with suggestions for events, nominations, interesting facts and figures, articles. We are more than happy to help you. The bureau can be contacted via: 030 600 1361 or info@lnvh.nl.

Drs. Lidwien Poorthuis (1982) is managing director and senior policy advisor at the LNVH. She studied French Language and Culture and Business and Organisation at Utrecht University and has been working in higher education and research for over 15 years. Since October 2013, she heads the bureau of the LNVH where she is responsible for policy making and policy development and the initiation and support of projects and activities in order to promote the proportionate representation of women within the Dutch university community. Contact Lidwien Poorthuis at: 06 15207225 | 030 600 1361 or poorthuis@lnvh.nl.

Sophie Reinders (1984) is programme manager at the LNVH. Sophie studied Dutch language and culture and Dutch literature at the University of Amsterdam. She obtained her PhD at Radboud University Nijmegen for research into friendship booklet of aristocratic, young women in the 16th and 17th centuries and worked as an assistant professor in early modern history at Utrecht University. In July 2021, she joined the LNVH Bureau team. Contact Sophie Reinders at 030 600 1342 | reinders@lnvh.nl.

Sanne Vergouwen (1996) is programme manager at the LNVH. She has recently finished the Research Masters Physics and Astronomy at the University of Amsterdam and History and Philosophy of Science at Utrecht University. In September 2022, Sanne has joined the LNVH bureau team. Contact Sanne Vergouwen at 030 600 1302 | vergouwen@lnvh.nl.

Irma Scheer (1980) is secretary at the LNVH. She studied Graphic Design at the Utrecht Art & Design College and has worked as a graphic designer for over 10 years. In August 2017 Irma decided to make a career switch and joined the LNVH Bureau team. Contact Irma Scheer at secretariaat@lnvh.nl.

For the first time in the history of academia in the Netherlands, one of every four full professors in the Dutch universities is a woman.